Camel milk is a very tasty and nutritious dairy product. This milk has long been loved and consumed in Eastern countries. Camel milk, which has a white, slightly sweeter taste, can vary in taste depending on how the animal is fed and the quality of the water it drinks. Camel milk has long been known for its healing properties in the United Arab Emirates and Central Asia. The Arabs consume camel milk every day. It is used to make koumiss, cheese and even ice cream and cocoa. 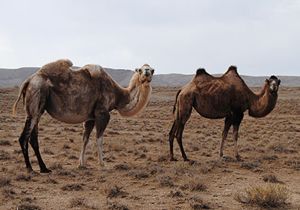 The sultan of medicine, Abu Ali ibn Sina, also wrote about the healing properties of camel's milk in his scientific work, The Laws of Medicine.

Two thousand years ago, camels were domesticated and domesticated in Arabia. Since then, two- or one-humped camels, which have long been drought-resistant, a grateful carrier, and valued for their meat and milk, their fur, have become man's closest companions. In the desert, the camel became known as the "desert ship" because it brought the caravan of traders to a place safe from the bitter sandstorms and the cold of winter and the heat of summer. In the desert, camels feed mainly on hay. This plant also has healing properties. It contains large amounts of minerals and biologically active substances. Decoction made from yarrow has antibacterial properties that fight germs. For this reason, the healing properties of camel's milk, which is fed with fennel, increase even more. In desert and semi-desert areas, the camel is the only mammal.

Nomadic Kazakh cattle breeders make koumiss from camel milk. To do this, they put a little yoghurt-like yeast in a mesh made of leather. The fresh milk is then mixed with the yeast in the dough of the camel's milk, which is filtered from the gauze. After a night and day, shake the dough well. You can see that a thick drink with a slightly salty taste, 8% fatter than our koumiss made from horse milk, is ready.

In Switzerland, camel's milk is used to make delicious chocolate. But this chocolate will taste salty. In Arabia it is used to make cocoa, and in India it is used to make ice cream. Camel milk is rich in vitamins V1, V2, iron, phosphorus, sulfur and calcium. In particular, vitamins C and D are three times more abundant in camel milk than in cow’s milk. Milk sugar - casein and lactose, by contrast, are found in small amounts in camel's milk. If the patient's immunity (the body's resistance to disease) is low, he should drink 0,5 liters of freshly milked camel's milk on an empty stomach every day. Then if he eats after 4 hours, he will feel a positive change in himself after a month or 40 days. During the period of consuming camel's milk, the patient should refrain from bitter, salty, smoked and various canned products, as well as from drinking alcohol and smoking. Because dieting enhances the healing effect of camel milk. Initially, this may push the patient’s stomach when consuming milk. There is also the possibility of vomiting again. In this case, too, the patient should not stop drinking milk. At this time, the body is cleansing the body of excess toxins (toxins). Even then, if the diarrhea does not stop, he should drink yogurt made from camel's milk.

Attention! Camel milk is not recommended for people who are allergic to any dairy products. In the past, when disinfectants were not invented, the Arabs washed wounds or sores with young camel urine. This method is still used today in desert deserts. They were also treated by drinking camel's urine and milk when their limbs became weak or when they felt pain in their intestines. Representatives of the Bedouin tribe living in Arabia these days still rinse their mouths with the urine of a young camel in cases of toothache, inflammation of the gums, and diseases of the oral cavity. They also use camel’s urine for dark hair growth and to prevent dandruff. This method is also effective in bit removal. Again, in colds and flu, the nose is rinsed with camel's urine. In inflammation of the eye is washed with camel's urine. An ointment is prepared by mixing crushed aloe leaves with camel's urine in the maturation of scabies and material (the bottom is covered with hard pus). Bediuns apply this ointment to the injured area of ​​the patient. Again, a patient with a constant fever is given an equal amount of urine mixed with the milk of a young camel. Patients with allergies and colds are treated by sniffing camel urine, which consumes citrus plants. Bediuns prepare a medicinal drink called al-makshura by mixing the urine of a young camel, which has not yet multiplied, with the milk of a newborn camel. It is noteworthy that the young camel must be fed with sagebrush and medicinal plants in the desert. Only then will his urine have healing properties.

Dr. Ahlyam al-Awadi from King Abdulaziz University studied the effects of camel urine on bacteria and fungi. On the basis of his scientific research, a drug called "vazarin" was created. Camel urine has been shown to be as effective as a broad-spectrum antibiotic in the fight against fungi, bacteria and yeasts. Patients were cured when the drug "Vazarin" was used in skin diseases (tetanus, psoriasis), allergies, material wounds, burns, fungal diseases of the feet and nails. This drug is safe and has no side effects. It is also in demand due to its low cost. Another Arab researcher, Muhammadani Ahmad Abdullah, worked with 15 patients for 15 days in the treatment of vodyanka. At the beginning of the study, these patients had accumulated too much fluid in the abdomen due to liver disease. The doctor-scientist advised patients to drink a certain amount of camel urine every day on an empty stomach by mixing it with its milk. Fifteen days later, the result was obvious. Because the tumors in the patients ’abdomen disappeared, the patients began to feel better. Muhammad also conducted a study with 15 patients with liver cirrhosis. Fifteen of them had fatty livers. The remaining patients had other causes of liver cirrhosis. The doctor treated them for two months using the method described above. The patients began to feel better. But even though the study period was over, many patients continued to drink camel’s urine and milk for another two months. After this period, when they underwent a medical examination, it was found that the patients were completely cured of liver cirrhosis.

Representatives of the Bedouin tribe treated four patients with leukemia (blood cancer) on an empty stomach for 40 days by mixing camel's urine and milk, according to the book Tariq al-Hidaya fi Dar Mahatir al-Jinn vash-Shayatin. author. During the treatment period, patients did not consume anything else. Bedouins living in Arabia call camel urine "al-wazar." Here's how to use it:

A cup of coffee (three tablespoons) is taken from the camel's urine and mixed with a bowl of camel's milk.

Yogurt made from camel's milk is called shubat. Shubat is a cure for tuberculosis, duodenal ulcers. In addition, camel's milk renews the blood. Has moisturizing properties for dry skin. That is, it rejuvenates it.

Several scientific studies in the Middle East and India have shown that camel milk lowers blood sugar levels in diabetics. Researchers at Cairo University in Egypt followed 54 patients with diabetes and insulin treatment for four months. Half of these patients voluntarily drank half a liter of camel milk daily in addition to insulin treatment. Laboratory analyzes in patients drinking camel's milk showed a positive change in carbohydrate metabolism. It is also a clear sign that the formation of S-peptide in the blood is "stimulated" by the pancreas to produce insulin. A two-year follow-up at the Diabetes Treatment Research Center in Bikander, India, found that 12 out of 3 insulin-dependent patients had recovered completely as a result of consuming regular camel milk. Decreased blood sugar was also observed in patients who consumed camel's milk in type II diabetes.

Scientists from the University of the Kingdom of Saudi Arabia were also attracted by the peculiarity of camel milk. Camel's milk, which is rich in insulin-like substance, is broken down in very small amounts in the gastric juice, making it well absorbed in the duodenum and allowing enough insulin to be present in the blood. In addition, camel's milk improves the activity of beta cells of the pancreas. Camel milk has long been recommended as a healing, tanning boon for patients with diabetes. This is because it contains a large amount of insulin-like protein. This protein, as mentioned above, is well absorbed into the bloodstream when exposed to gastric juice and helps lower blood sugar levels. However, we do not recommend that patients taking regular insulin suddenly discontinue this medication. We would like to remind you that it is more beneficial for their health if they drink 0,5 liters of freshly milked camel milk per day (for adults) in consultation with their treating physicians. Because nature itself is a doctor.